When visiting the Greater Caucasus region, it is advisable to travel to all three countries in the region, Azerbaijan, Georgia and Armenia. When I traveled the region in the summer of 2017, I had the opportunity to visit all three countries in exactly that order. After stays in Baku, the beautiful mountain village of Xinaliq and a short visit to the Caspian Sea, I next headed towards Georgia. However, to get to know another facet of Azerbaijan, I decided to have a stop in Shaki in north-western Azerbaijan which is also recommended by the Lonely Planet guide book. After Baku with its numerous modern buildings, I hoped to explore another architectural side of the country in Shaki. Furthermore, I was curious to visit the city because it is known to have been a major station of the historic Silk Road. 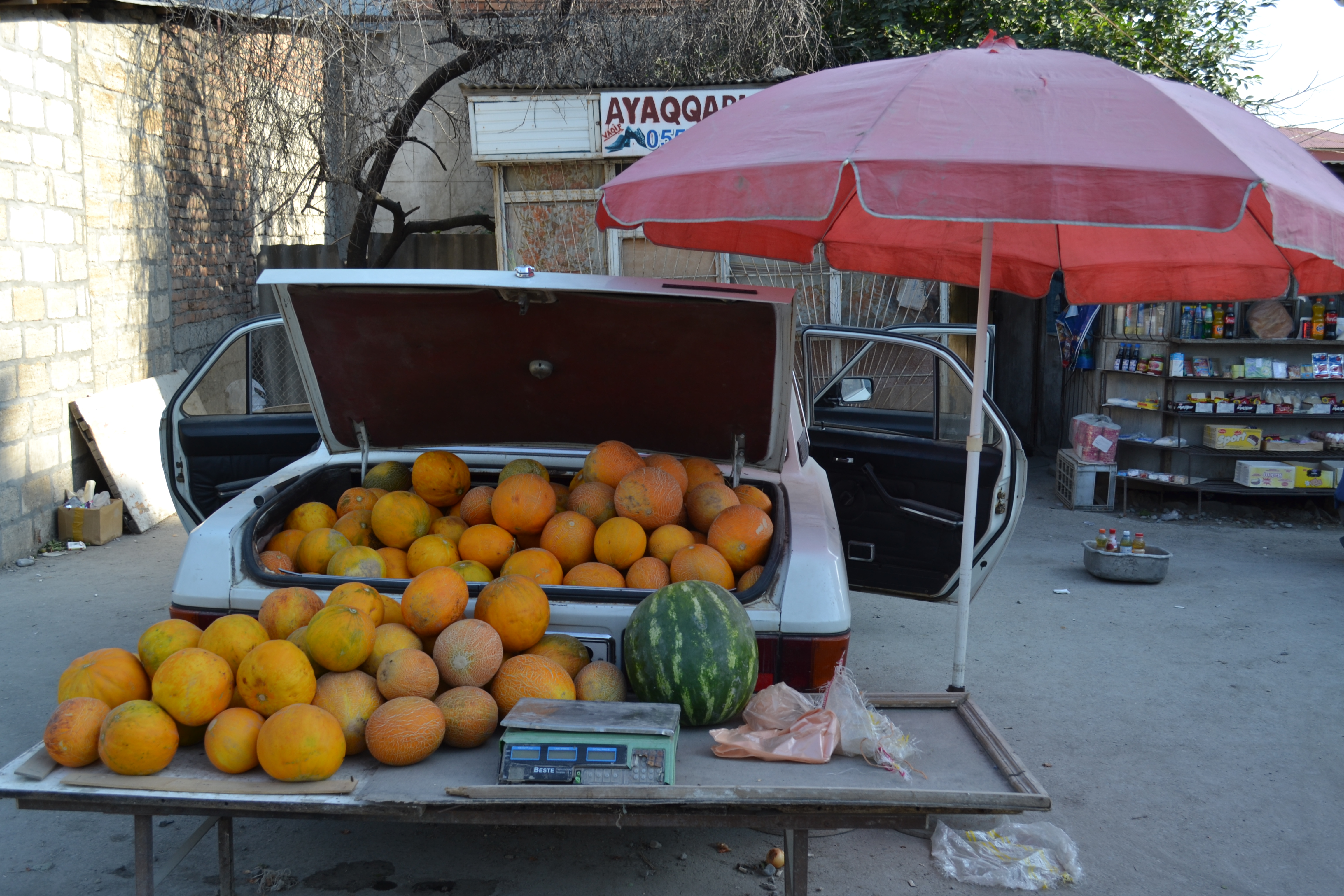 Let’s start with some basic facts about Shaki. The Azerbaijani city, also known as Şəki, is located 325 km northwest of Baku on an altitude of 630 meters and has about 63,000 inhabitants. The first traces of settlement in the region are in the Late Bronze Age and over 2,700 years old. In the 1st century Shaki was part of the Kingdom of Albania about which I already referred to in my article on Xinaliq. Throughout history, the city has been part of the Abbasid caliphate, the kingdom of Georgia, the Shirvanshah dynasty, the Safavid dynasty, the Atabegs of Azerbaijan, the Mongol rule, the Ottomans and the Russian empire, wherefore it has Arab, Georgian, Turkish, Mongolian, Persian and Soviet influences. Due to frequent destruction, however, the oldest historical buildings date back to the 16th century. By the way: Most of the scenes of the play “The Caucasian Chalk Circle” by Bertolt Brecht take place in Shaki, whereby Shaki appears under its old name ‘Nukha’.

Due to its geographical location and the breeding of silk spinners which are indispensable for the production of silk, Shaki became an important place on the legendary Silk Road. This fact is also reflected in the architecture and buildings of the city. The 18th-century Palace of Shaki Khans and several Caravanserais are among Shaki’s top attractions. Caravanserais were roadside inns where travelers were able to rest and recover from the day’s journey, especially along the Silk Road.
The Palace of Shaki Khans is listed on the UNESCO Tentative List since 2001, bringing together sites that have been nominated for being listed as UNESCO World Heritage one day. It served as the summer residence of the Khans of Shaki and was built in Persian style. The building is decorated with paintings, mosaics and carvings and was built without the help of even a single nail. The palace is also one of the venues in Leo Tolstoy’s ‘Hajji Murat’ novel. 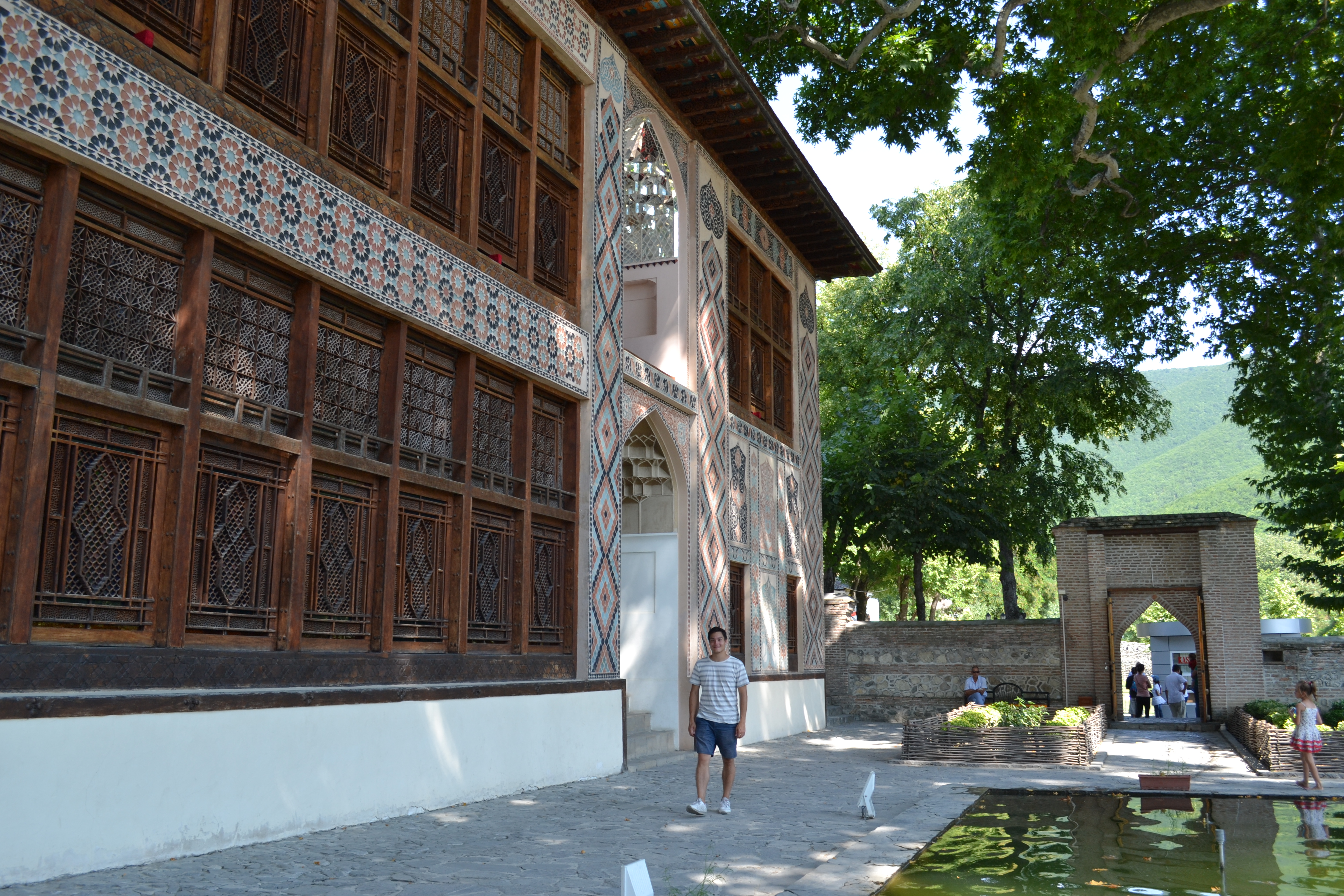 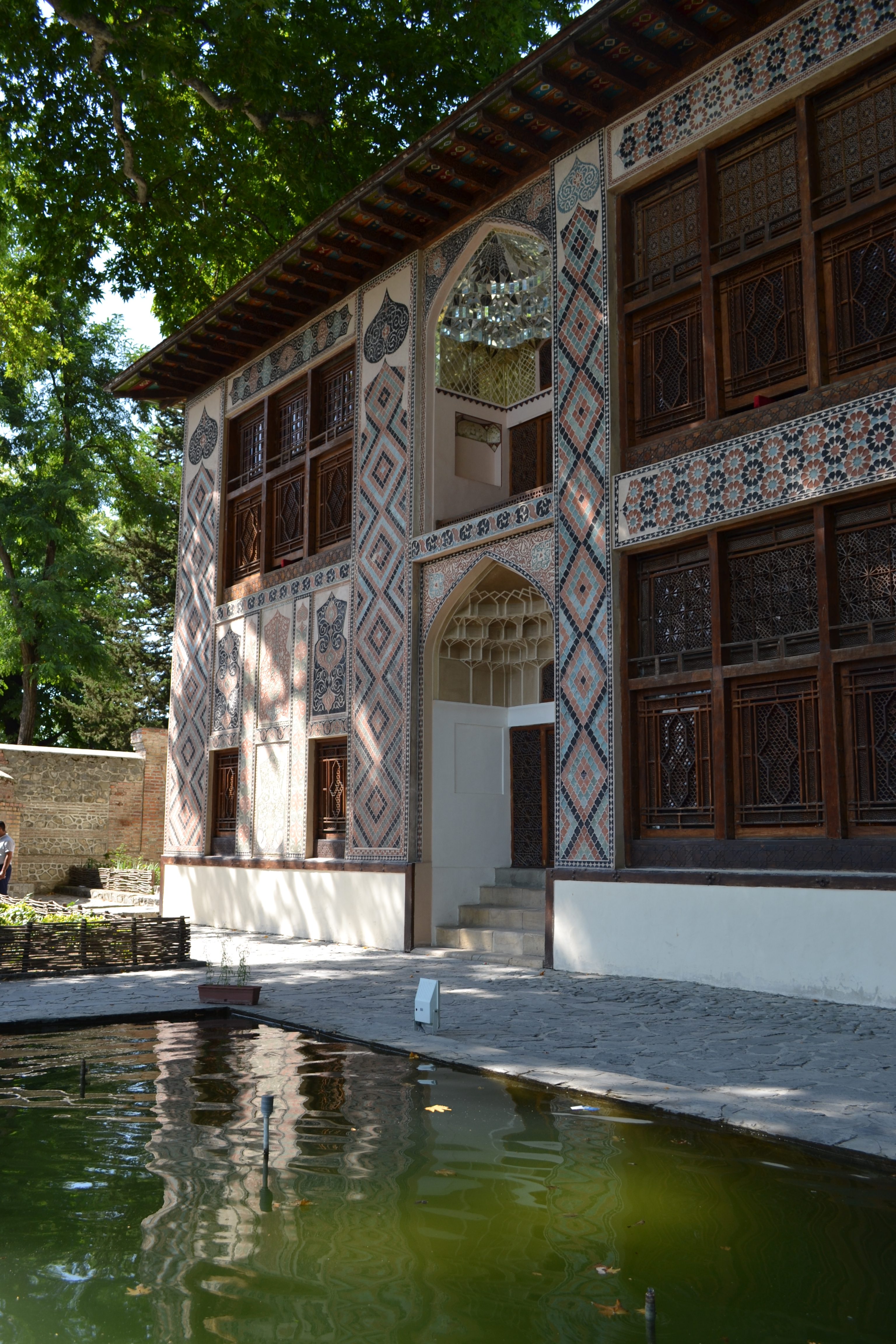 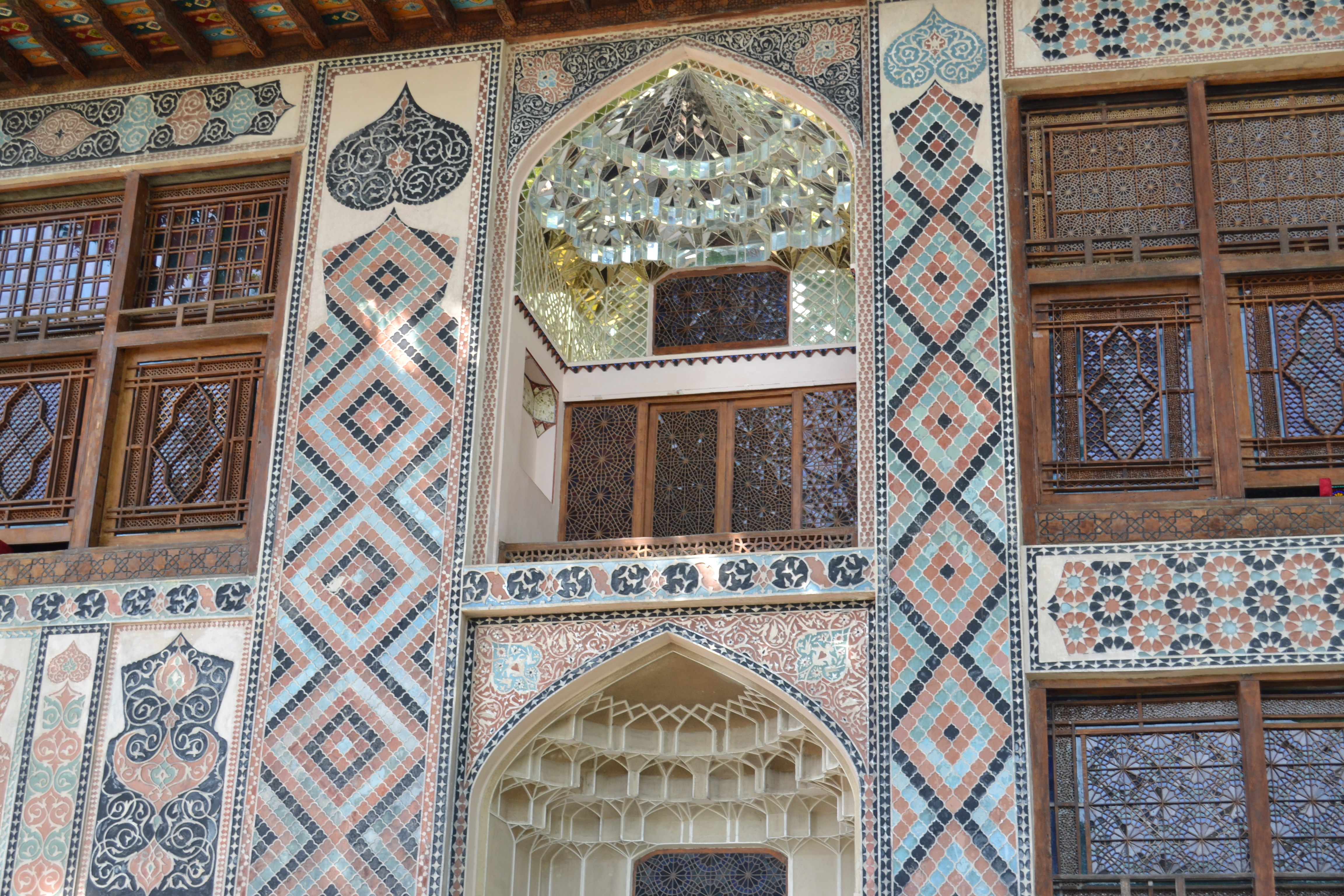 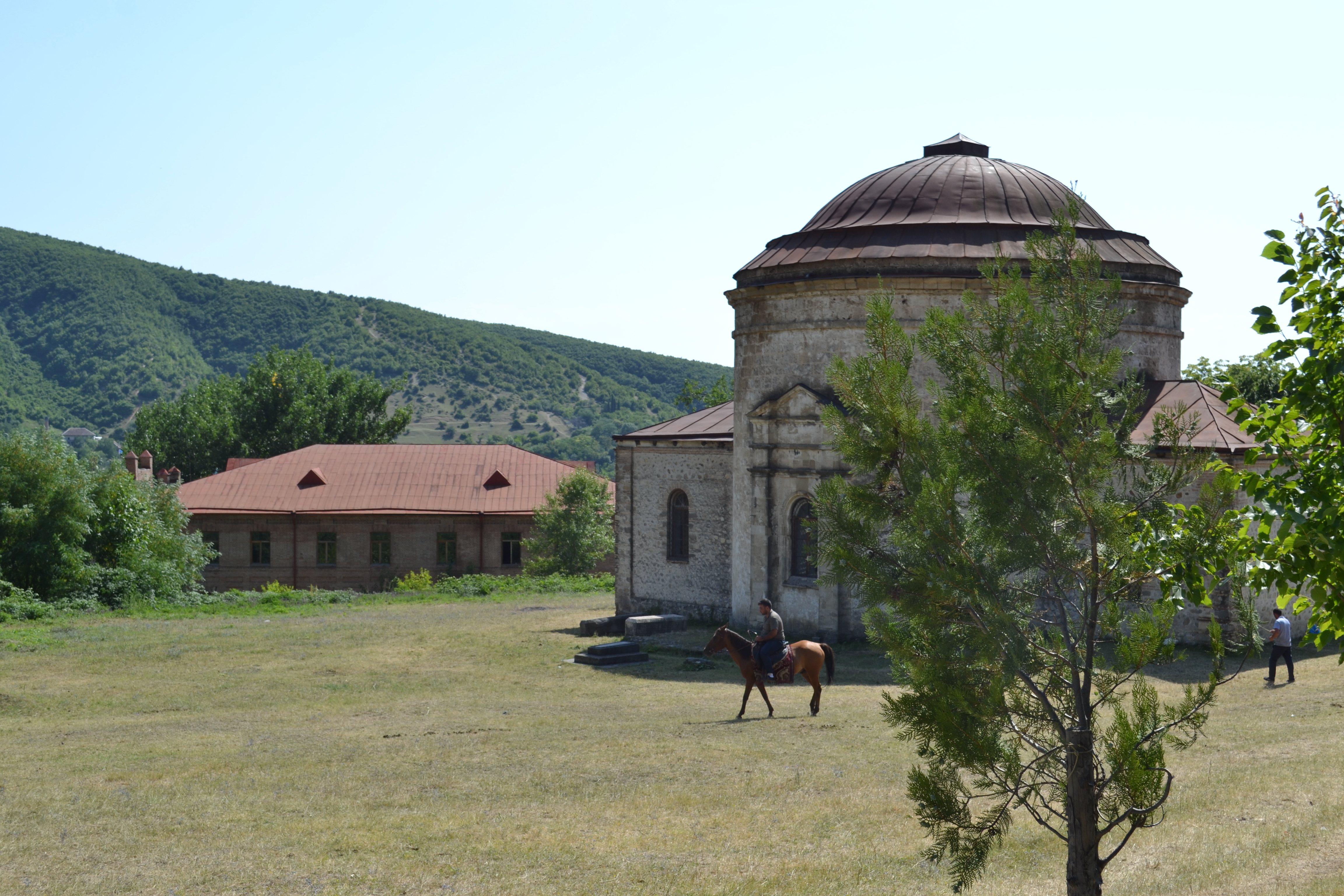 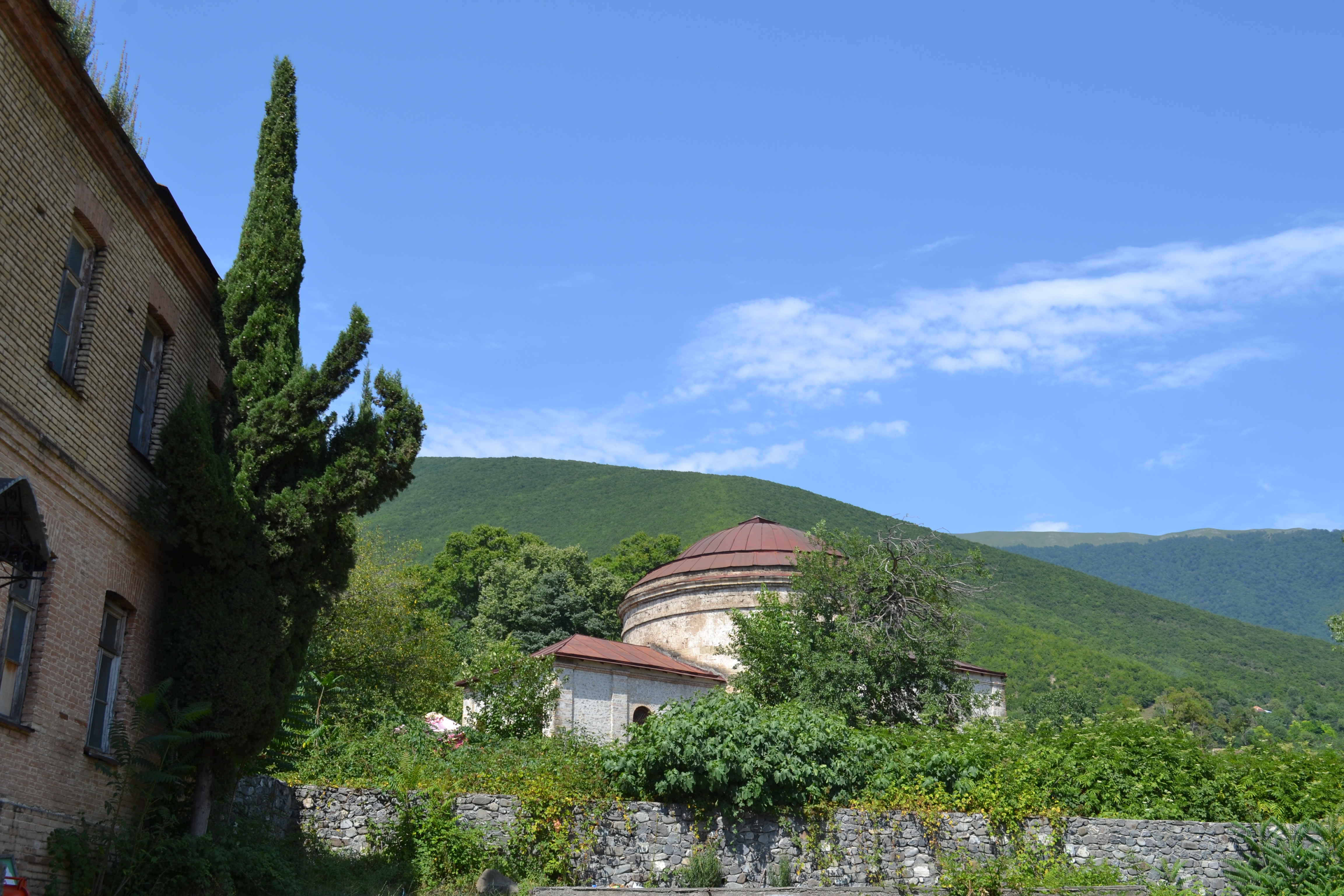 Worth seeing is also Shaki Caravanserai. Nowadays converted into a hotel, you can still visit the courtyard and marvel at the architecture. A wonderful oasis of silence and peace where one can only guess how traders stopped here at the time of the legendary Silk Road. 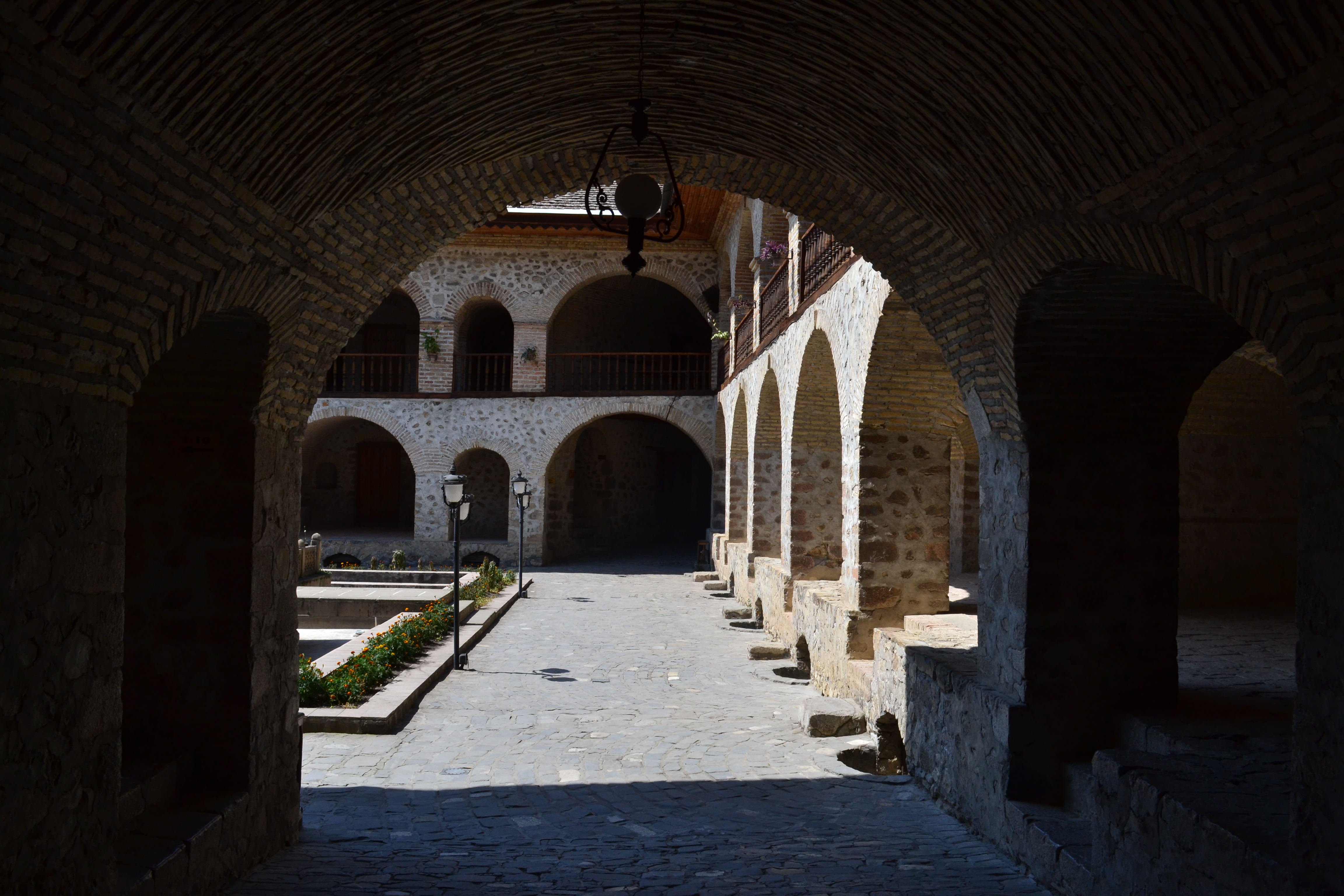 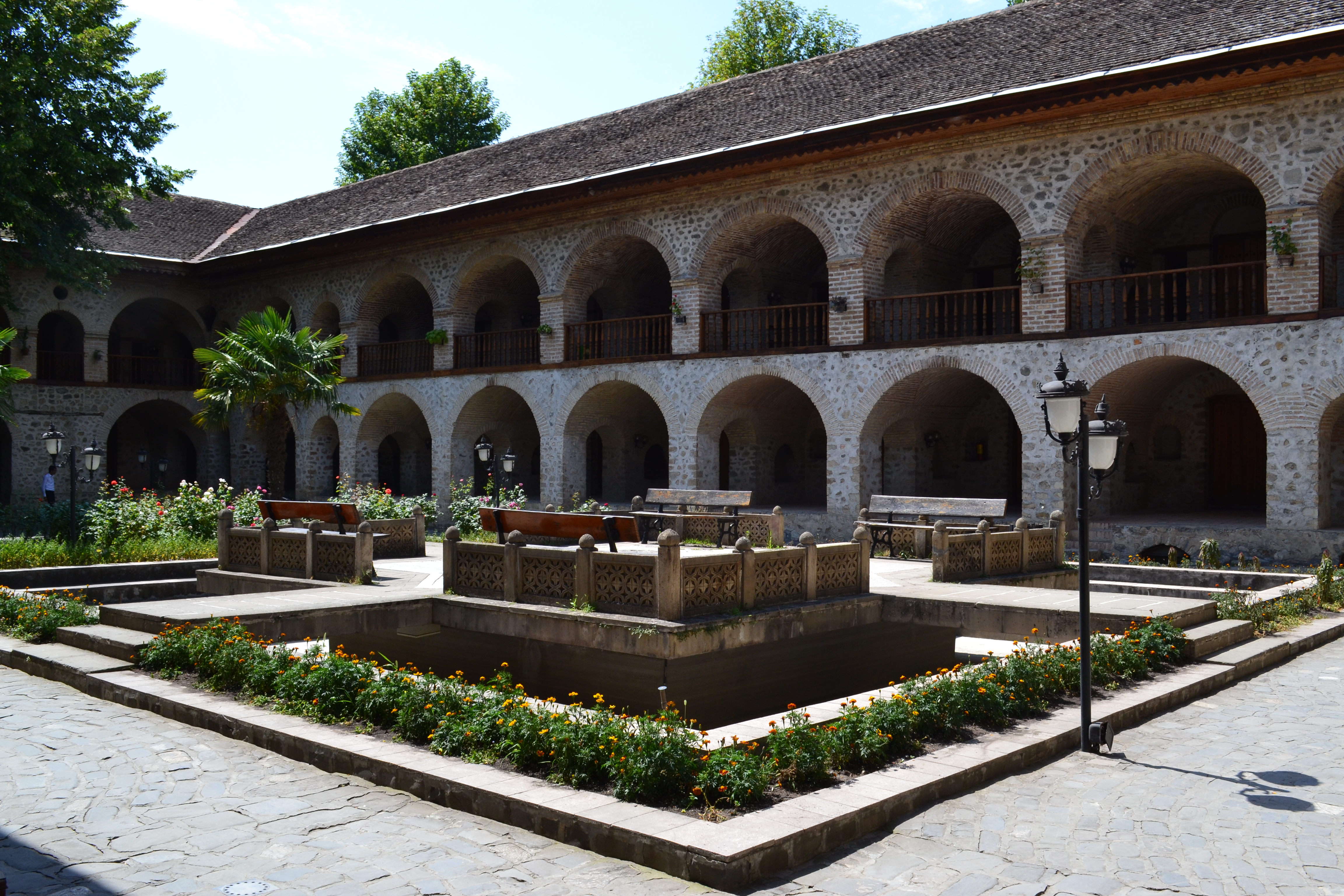 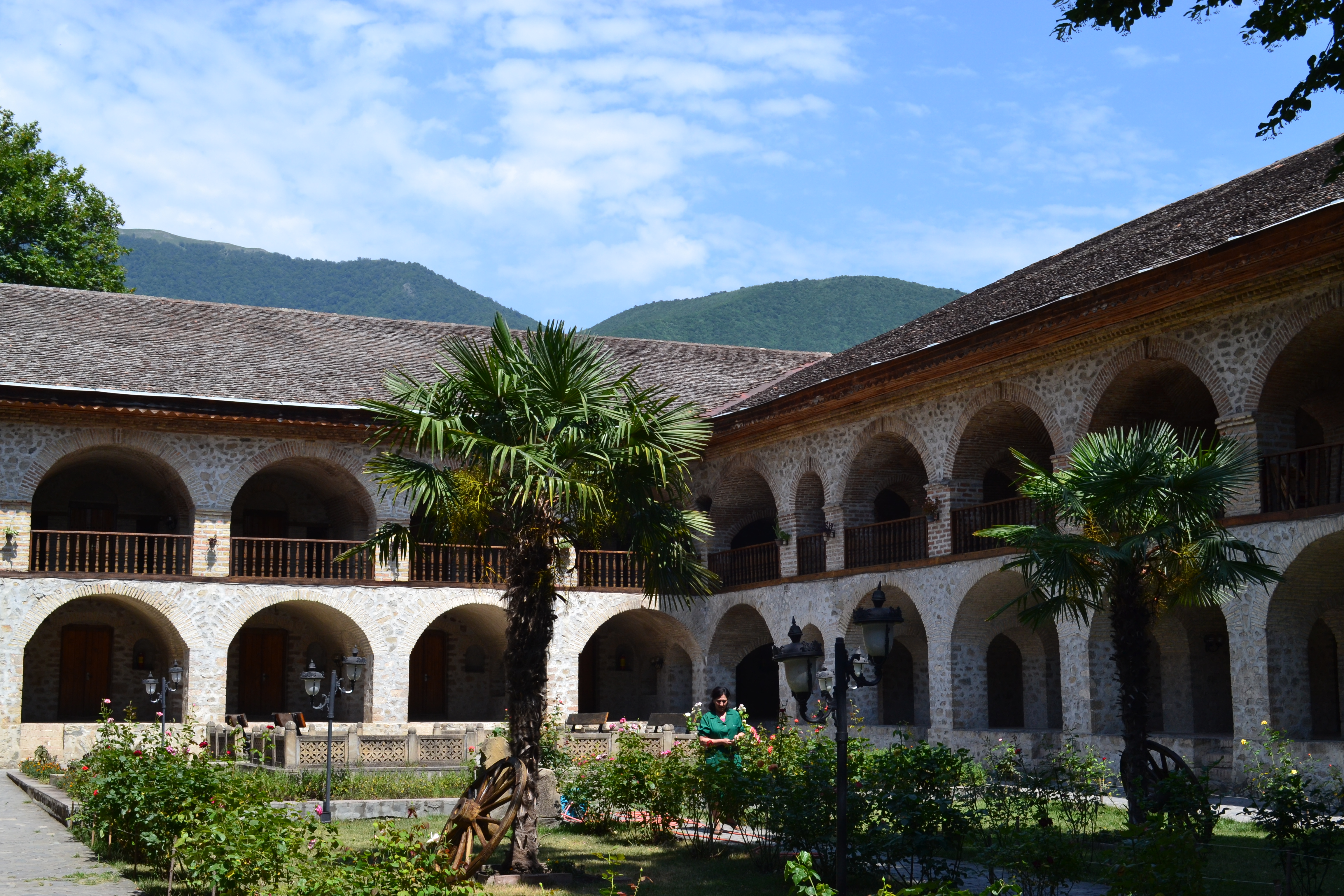 What I particularly liked in Shaki was the peacefulness of the city as well as the green mountains that surround the city. Shaki feels more like a big village and is left out by many travelers. The buildings in the old part of the city often have red roofs and characteristic wooden balconies. As in Xinaliq, Ladas are also part of the cityscape here. With the knowledge in mind to visit metropolises such as Tehran, Colombo, Hanoi or Ho Chi Minh City during my trip, the tranquillity in Shaki felt somehow surreal but relaxing. 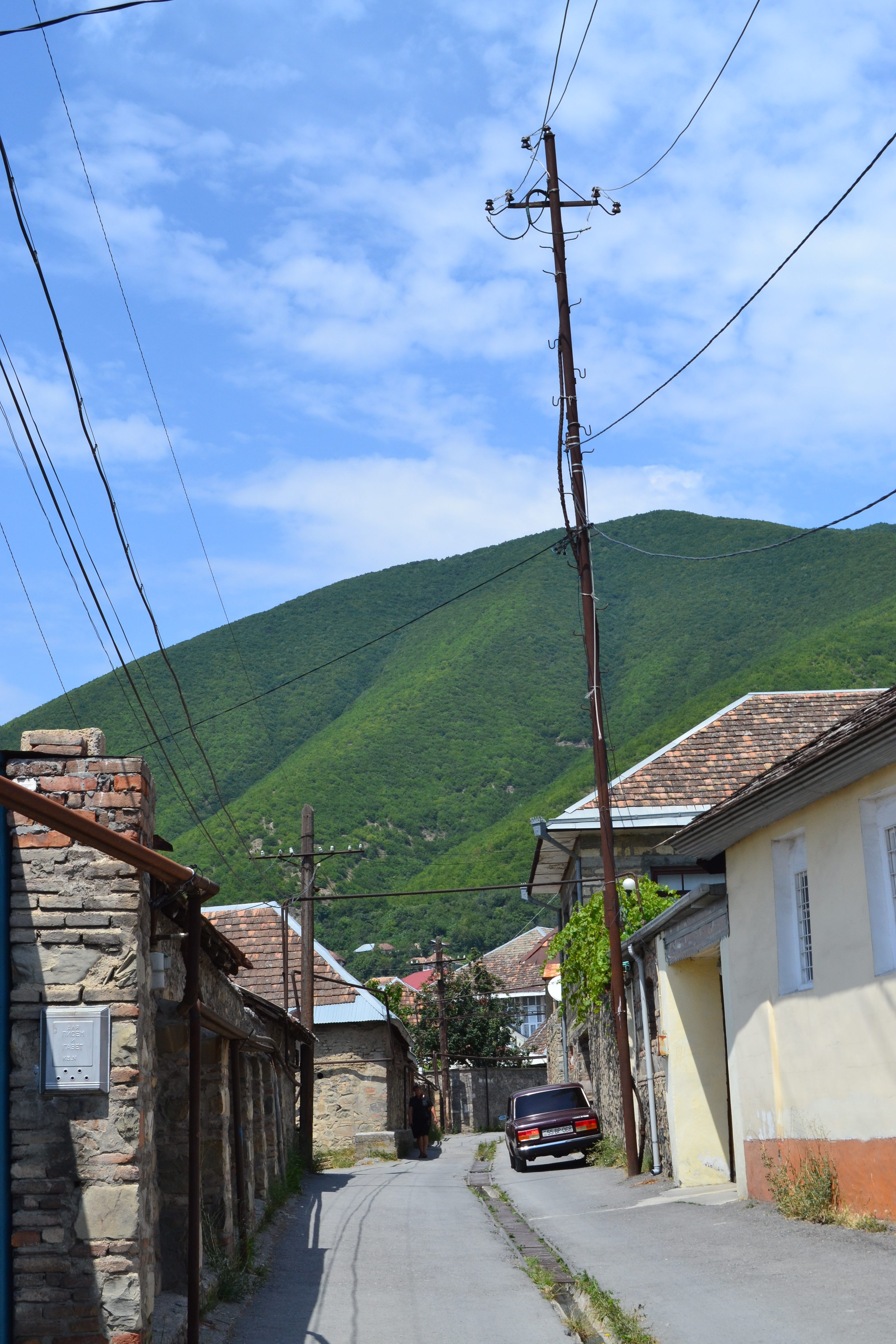 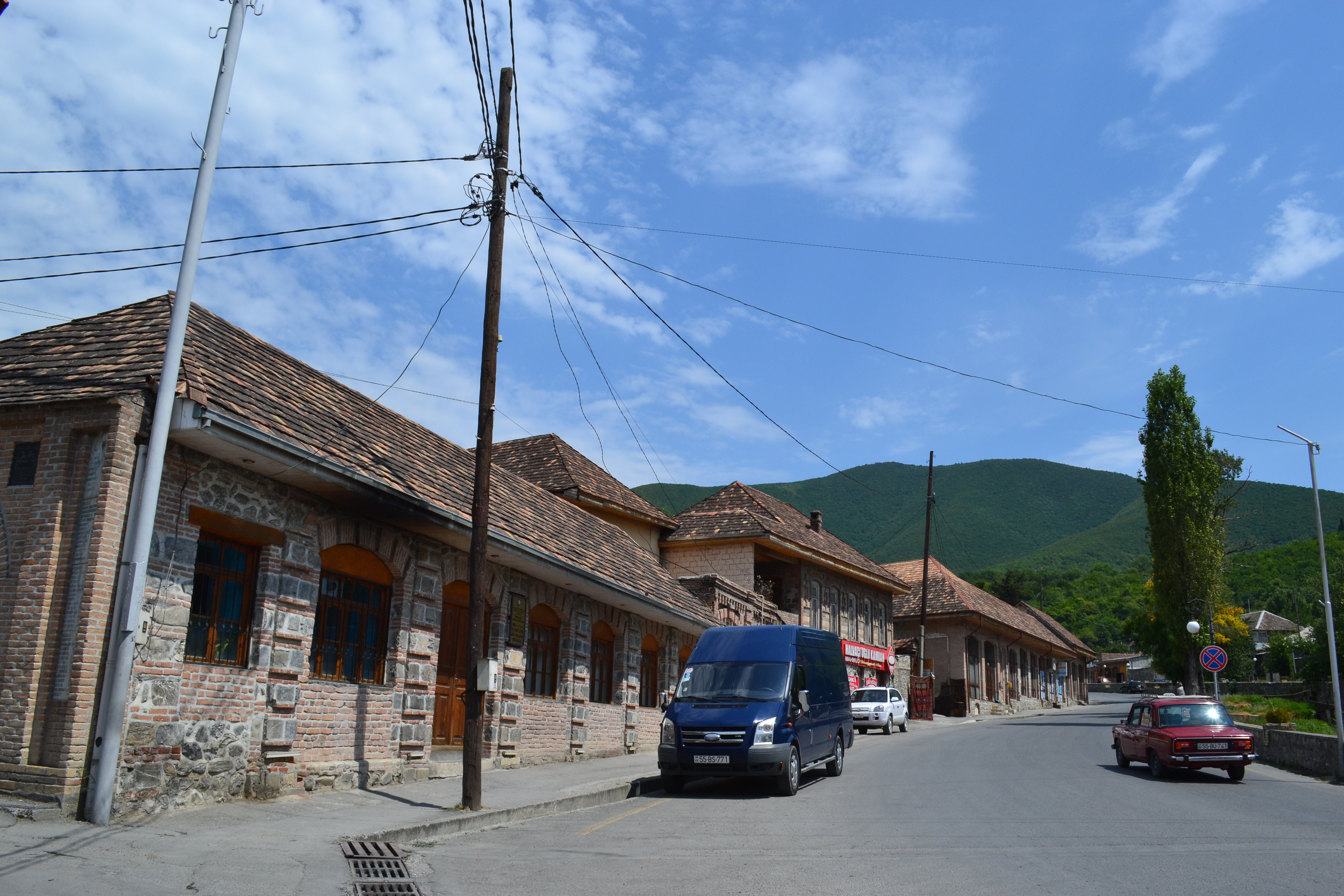 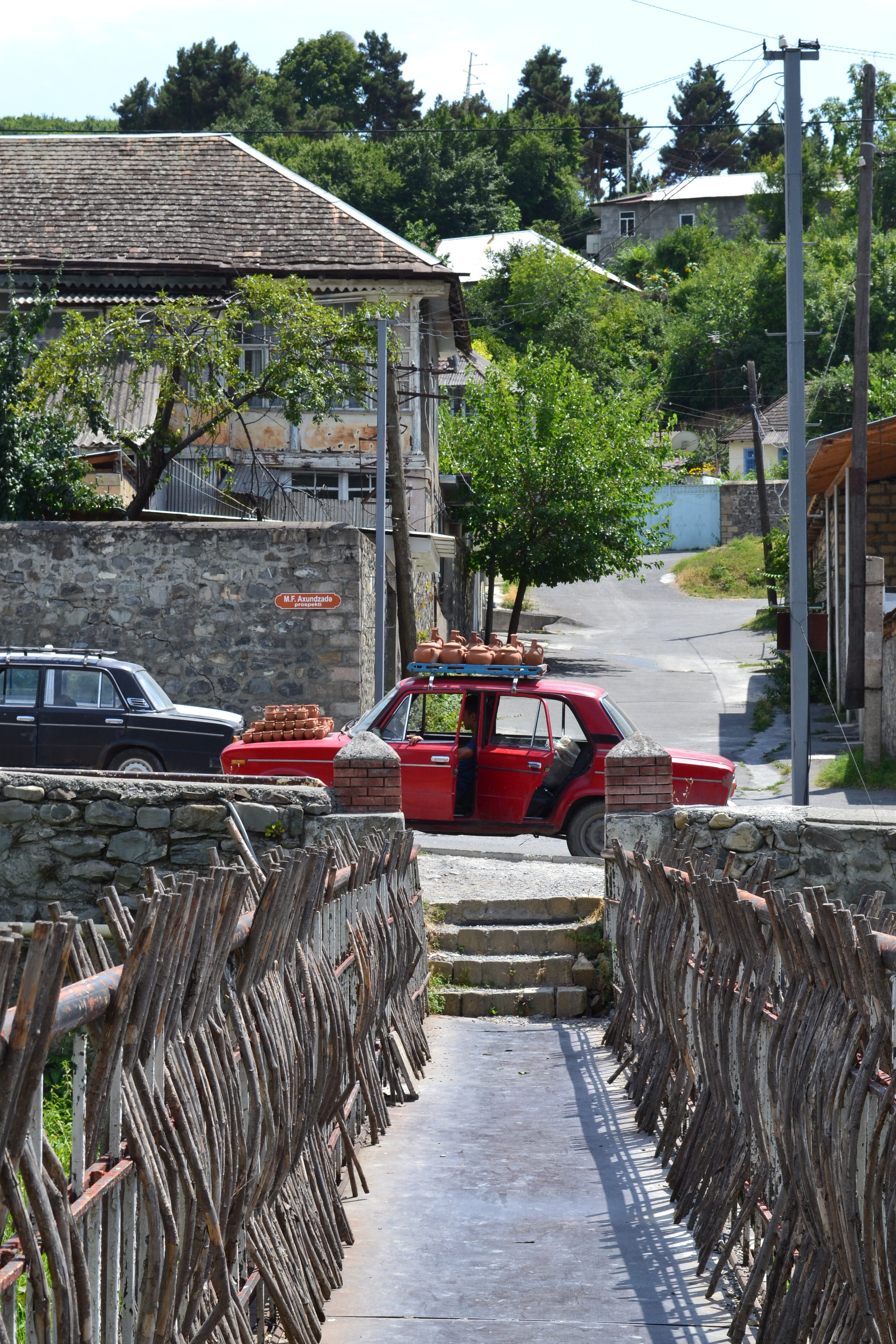 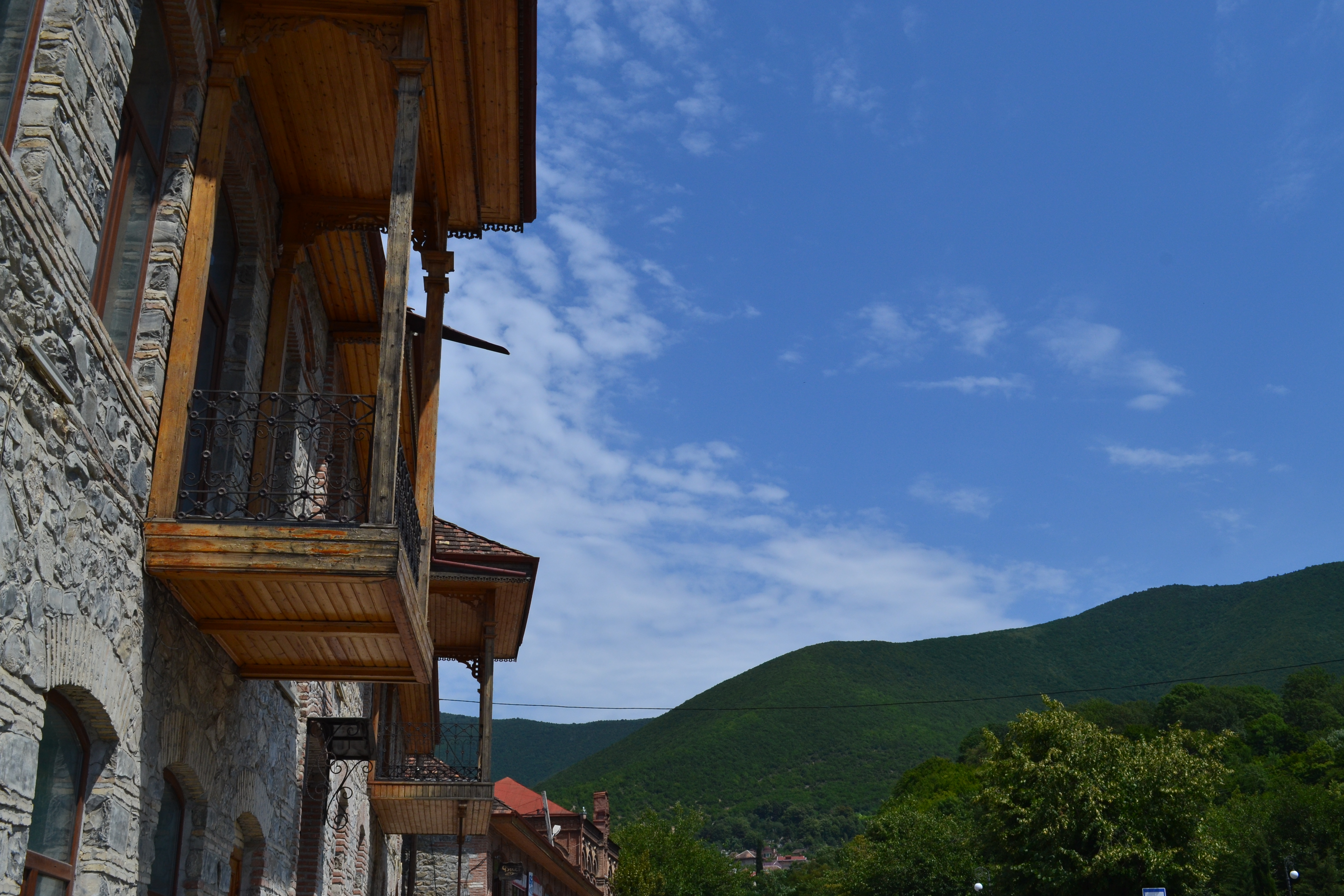 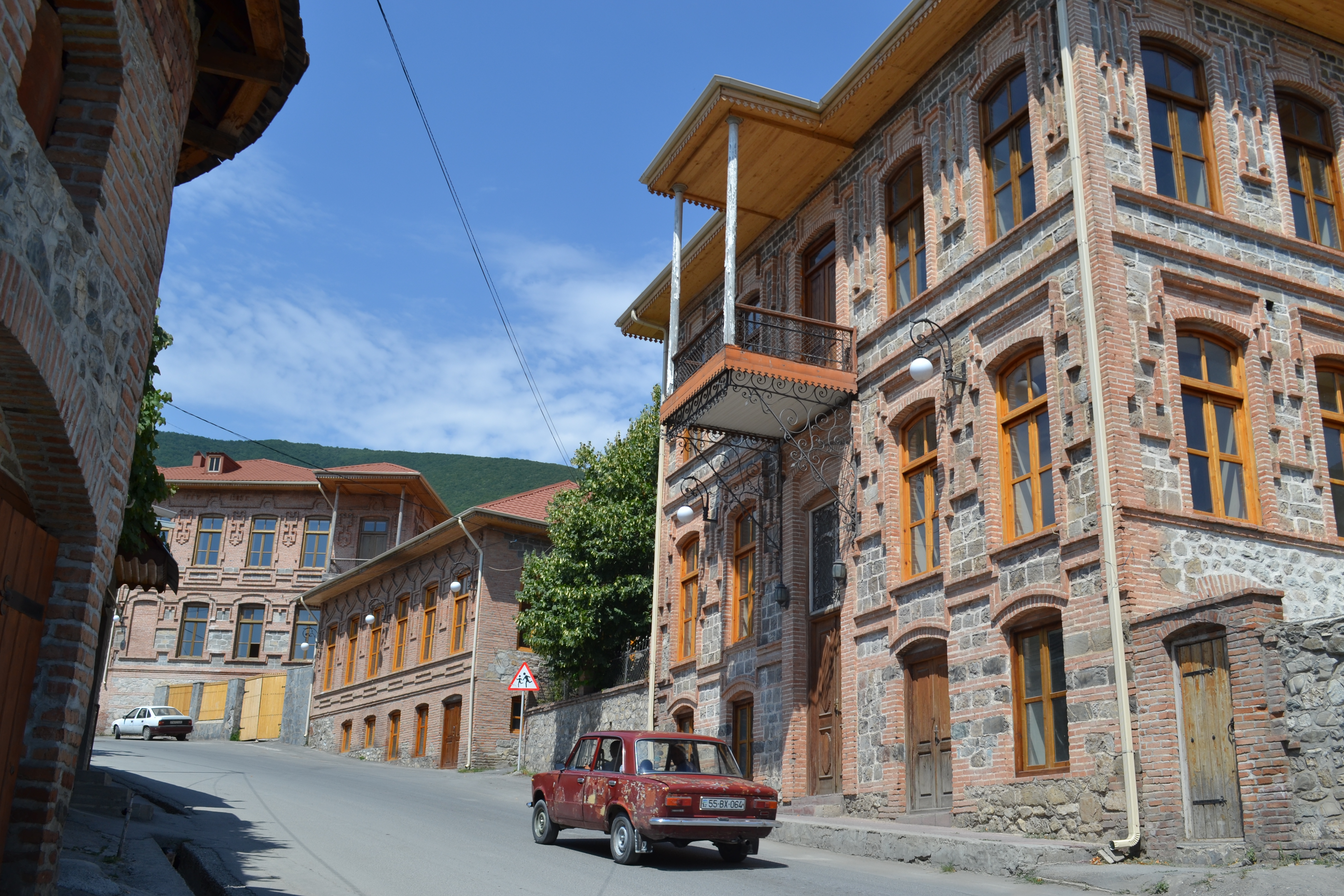 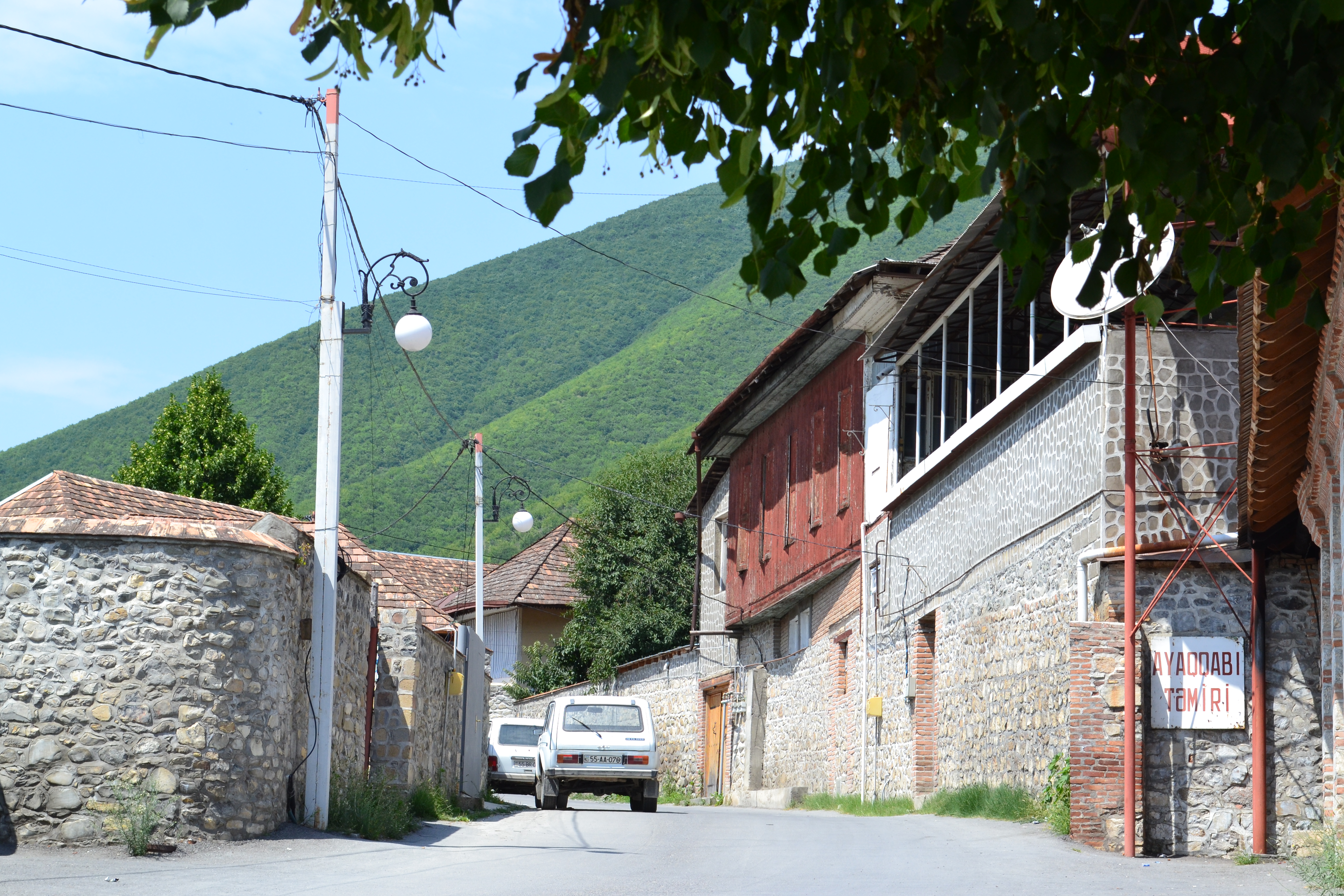 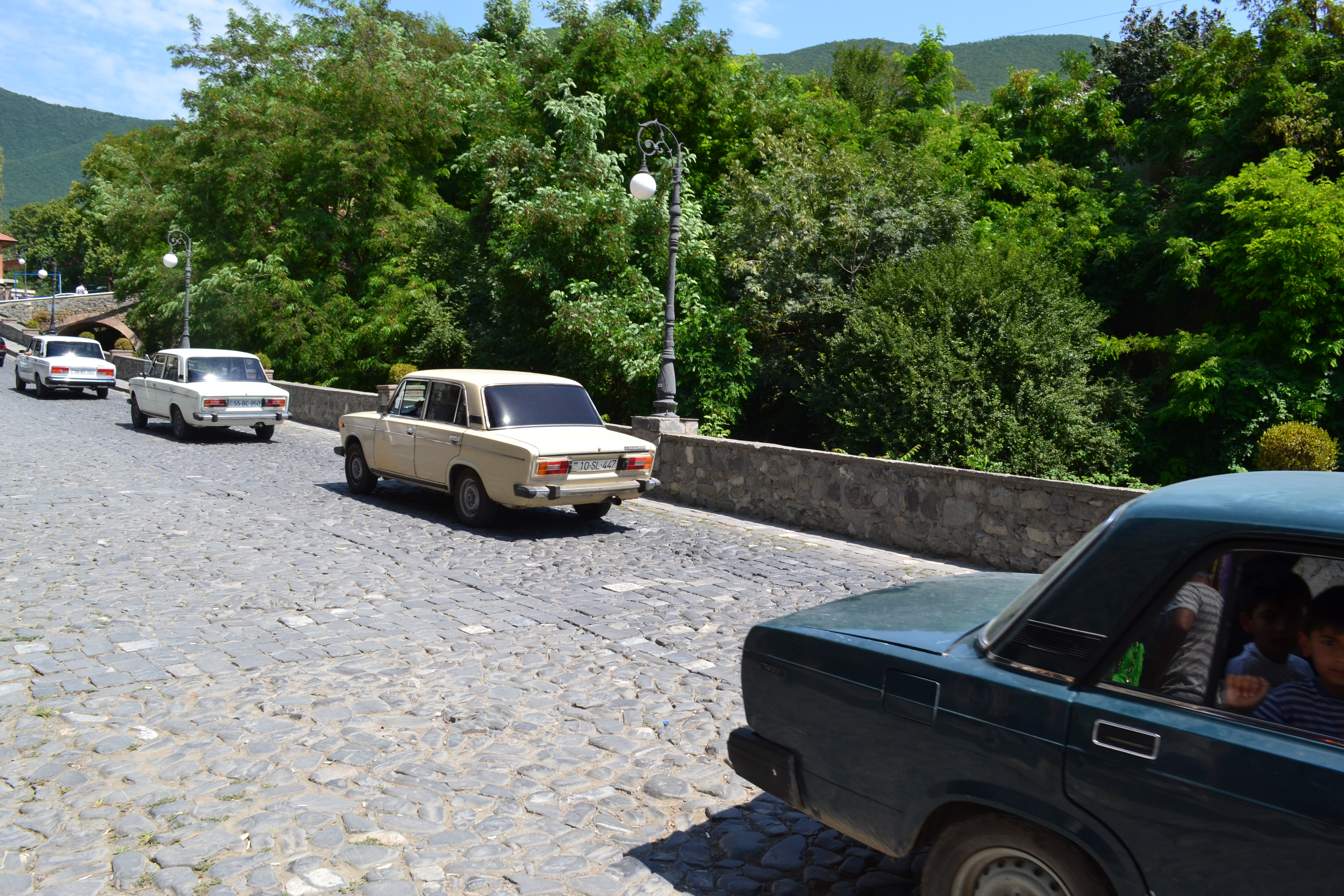 From Baku it is advisable to take a minibus (Marshrutka) to Shaki. These busses drive on a regularly basis to the northwest of the country and depart from Baku main bus station. Busses are leaving as soon as every seat is occupied. It’s rather hectic at the bus station since there are many dealers who want to sell you whatever comes to your mind (or not), for instance soft drinks, bread, toys or mobile phone chargers. Try to get a window seat since the view while driving is wonderful and compensates a little for the narrowness in the interior of the van. 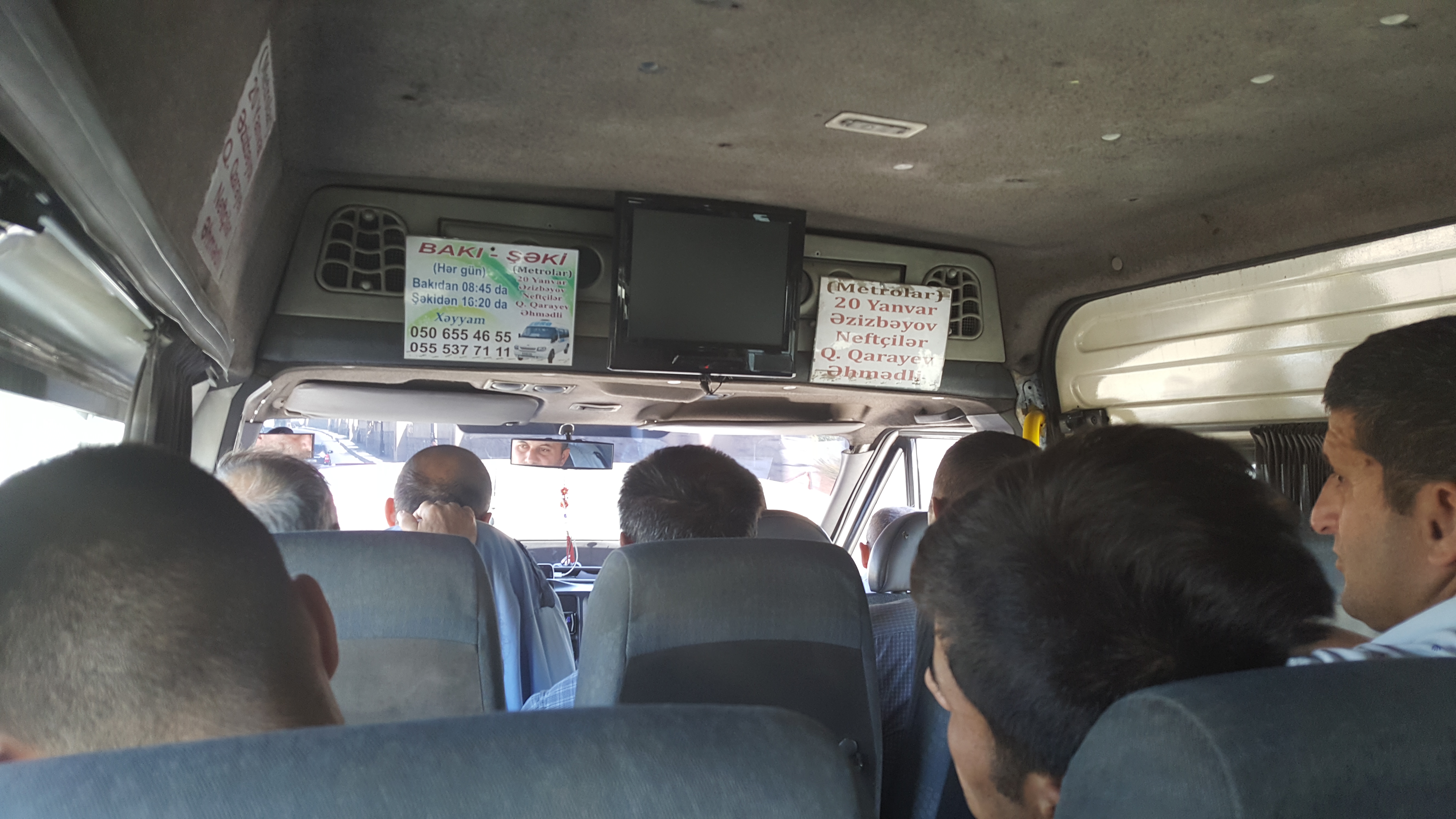 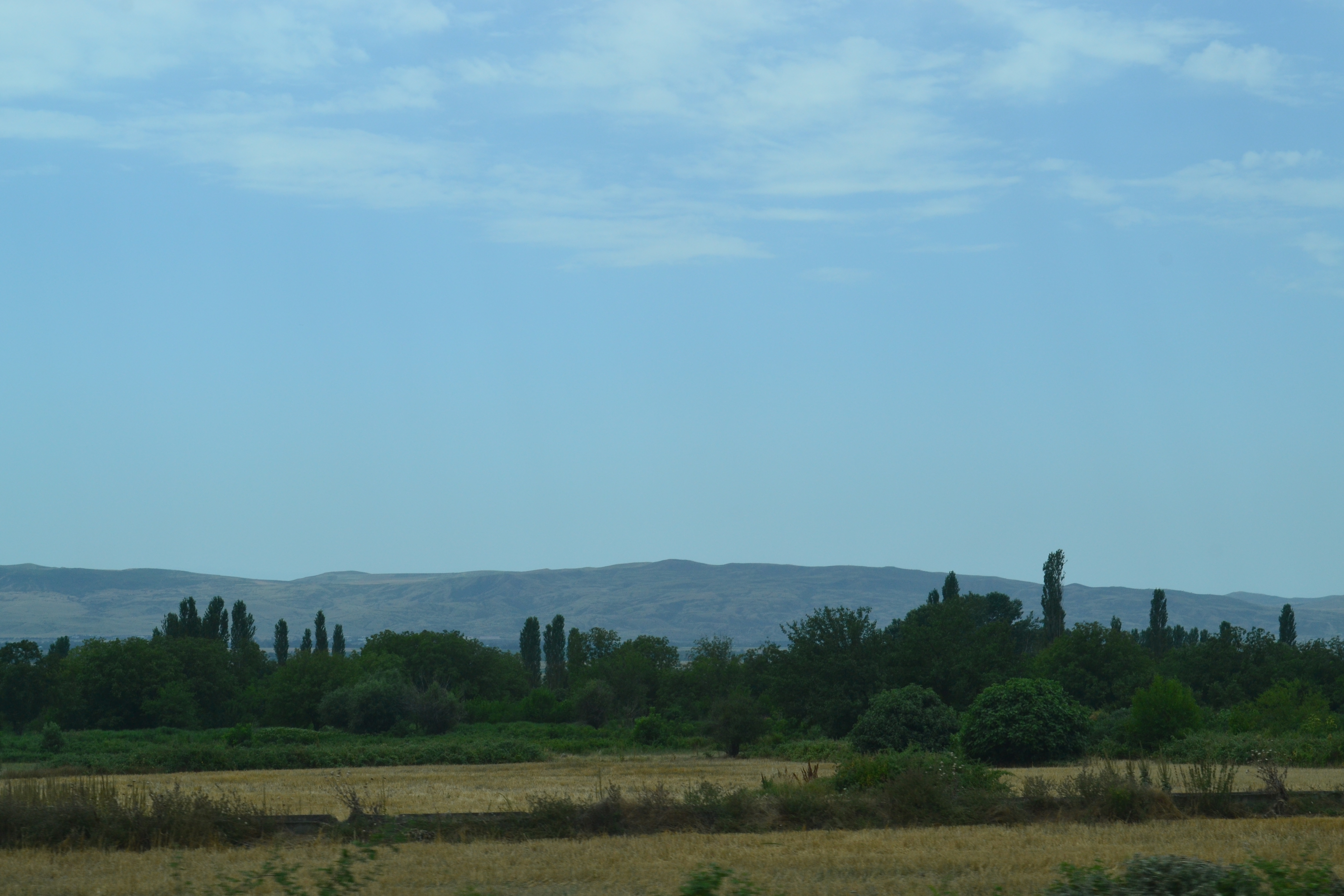 Shaki offers several hostels and hotels, especially in the city center. However, I decided to choose an accommodation outside the center: the Tehran Hostel. 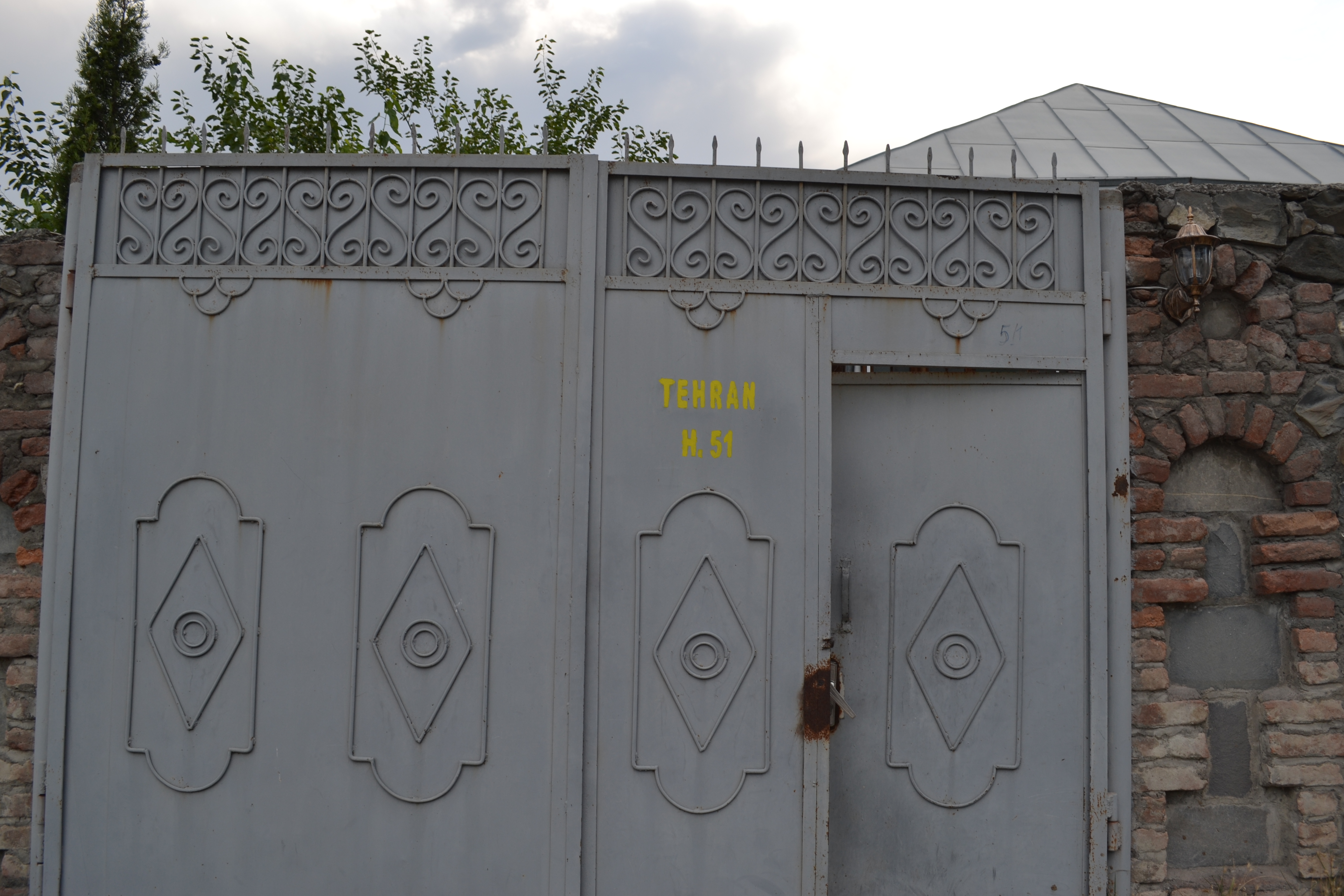 Getting there by taxi was adventurous because the driver could not speak a word of English and of course did not know the little hostel. However, I managed to get there and could not believe my eyes: In fact, the property was a classic Azerbaijani residential building in a super quiet residential area, even with cows crossing the street. 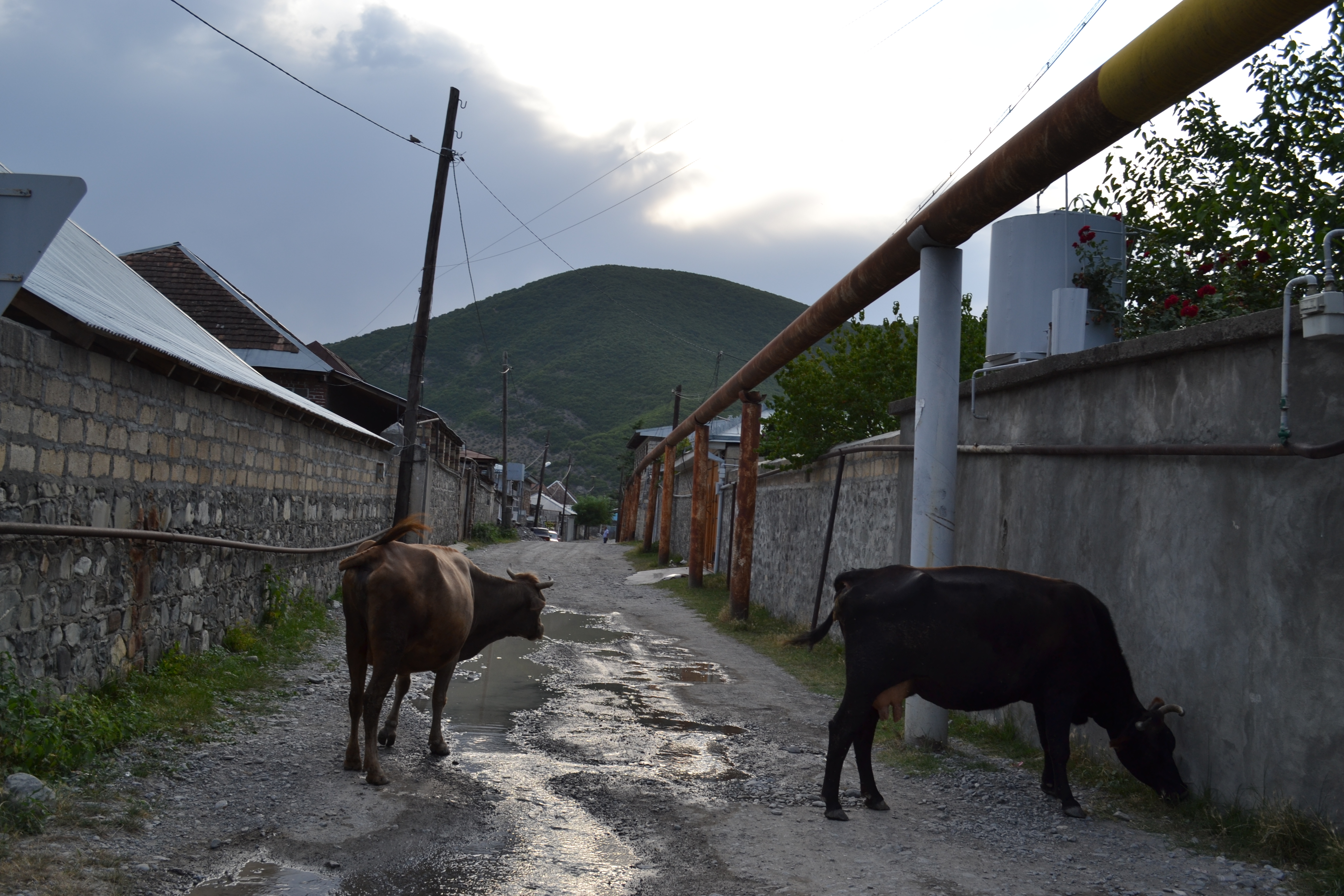 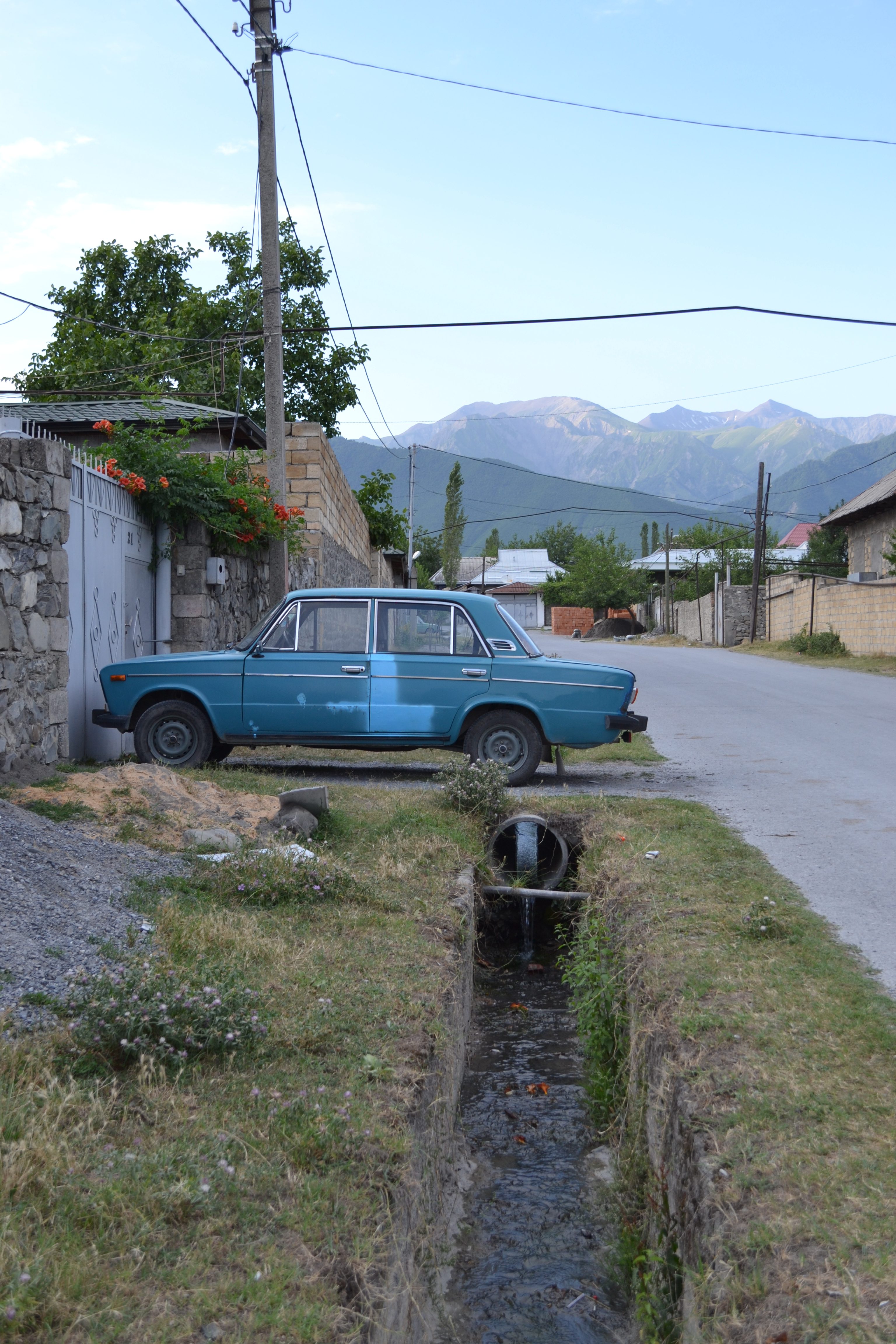 I knew I had made the right decision and was warmly welcomed by Tehran, the owner, and his family. The upper part of their house has been converted into an accommodation for travelers. Wonderful, with a garden, traditional decor and the mountains around. Thank you again Tehran! 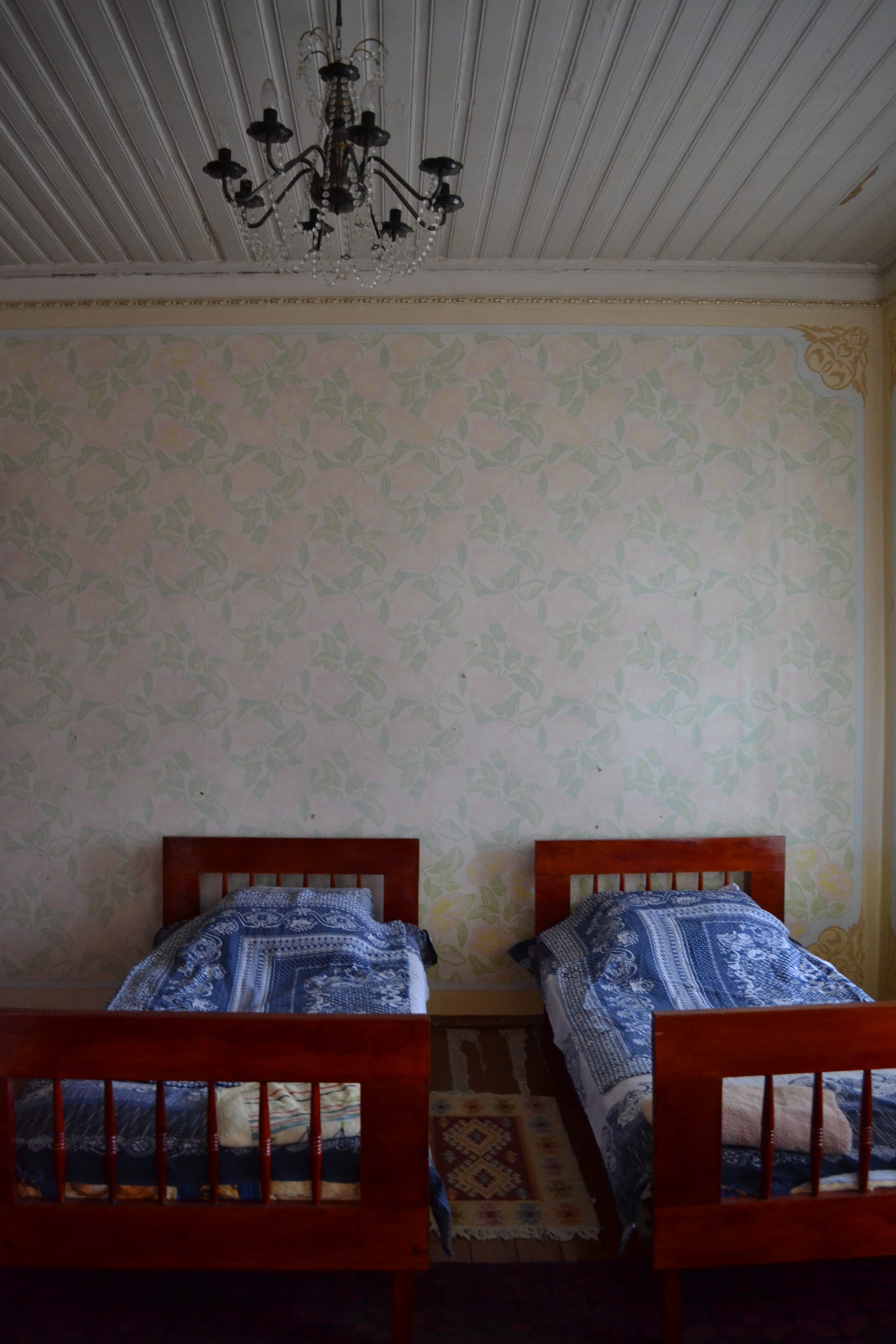 I also recommend you to visit “Chalabi Khan”, a restaurant where you can eat well and traditionally while sitting outside in a nice courtyard.

Overall, visiting Shaki was the right decision. The city may not offer too many attractions but it’s the atmosphere and different architecture to other places in Azerbaijan I enjoyed a lot. 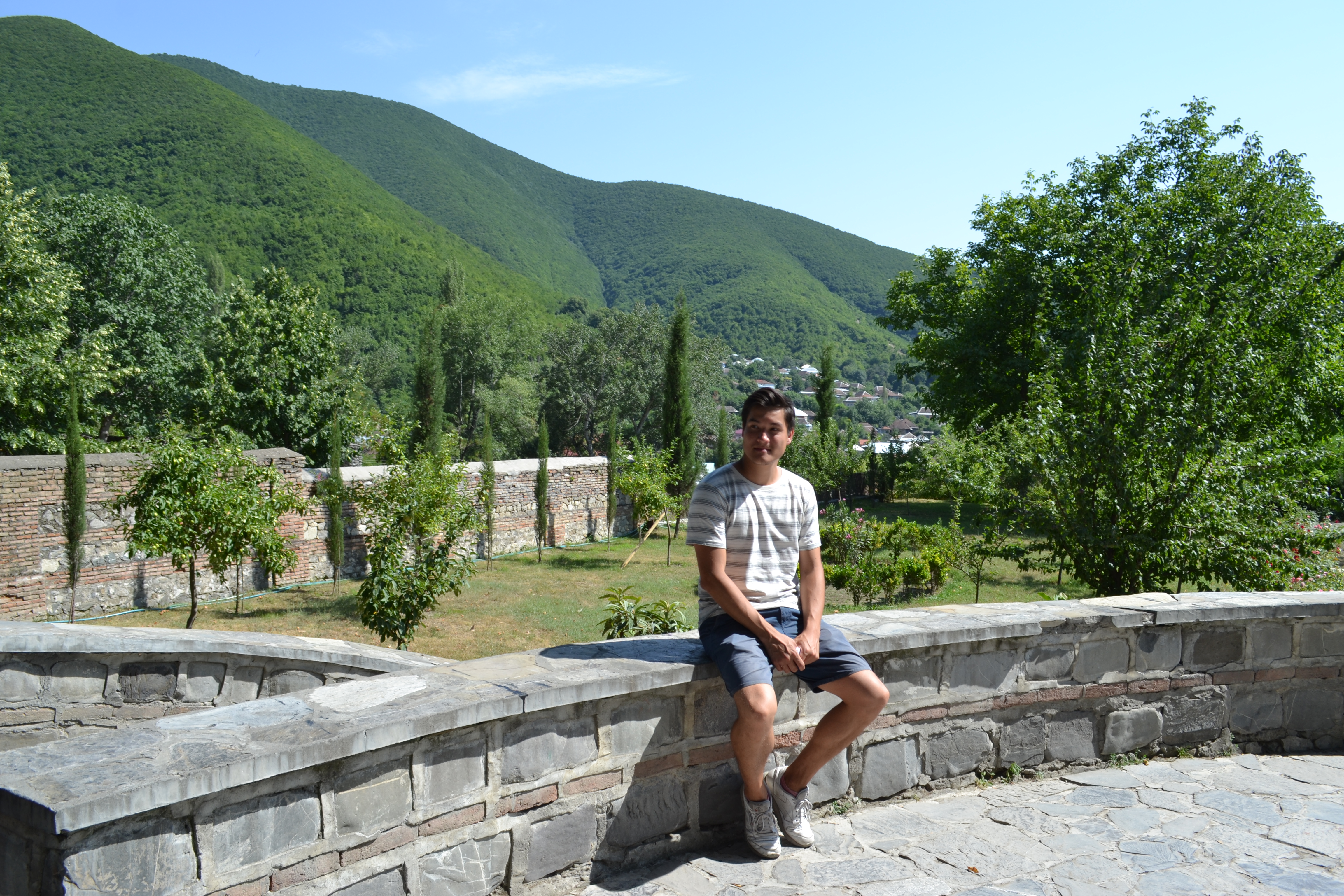 6 Replies to “Traveling from Azerbaijan to Georgia: One day in Shaki”